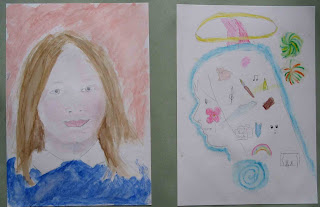 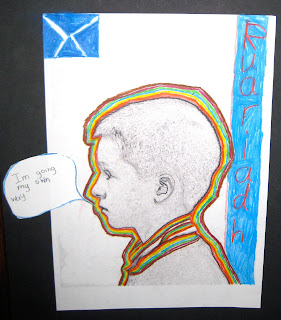 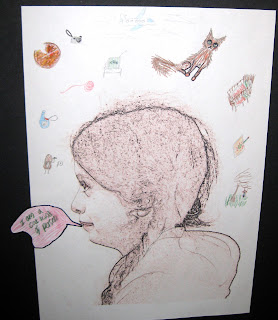 I printed another profile portrait in black outline, although some printed in a nice shade of sepia, a happy accident with our aging printer.I was going to repeat the exercise with the children tracing with carbon paper but as the prints resembled beautifully shaded line drawings I didn't want them spoiled. I mounted the prints onto black paper and told the children to add elements of themselves....coloured outlines, favourite things, pets, hobbies... little drawings glued round the portrait and overlapping its edges into the black.Last term we had discussed Chagall and his obsession with imagery from his own childhood, I pointed out that they were experiencing childhood when everything seems more very vivid.They were quite inspired, excited and produced some brilliant images.
Posted by Susan Dalgleish at 10:08 No comments: 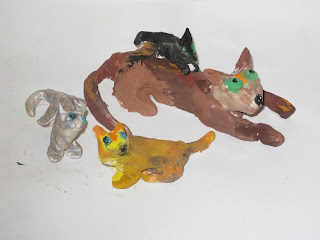 More clay creativity this week, works include mirror frames with impressed decoration and tiny animals, a group of ships including a viking longship complete with sail and shields, a ferry, a ship wrecked and broken apart on rocks, a wall with 2 cats scavenging tin cans and a crisp packet, a self-portrait, a car, and a family of cats. We use Flax paper clay which is great for modelling as really fine parts remain strong, and it is really good for its dry strength. I have to transport the models from church hall to my studio along a cobbled lane. There was always one who had forgotten to glue parts together with slip causing a certain amount of shedding of noses etc just as I was about to load the kiln but now parts do not drop off so readily and are easily repaired with this forgiving material. During firing I have to run an extractor fan as the flax burns off creating a localised bonfire complete with fumes in my studio.
Posted by Susan Dalgleish at 04:10 No comments: 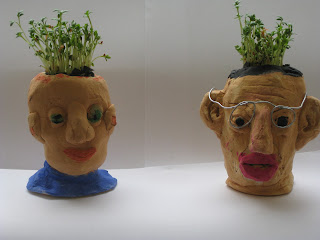 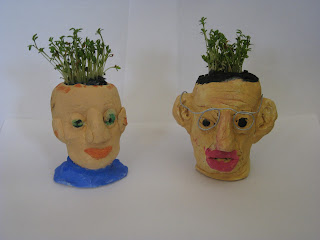 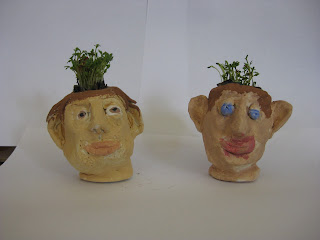 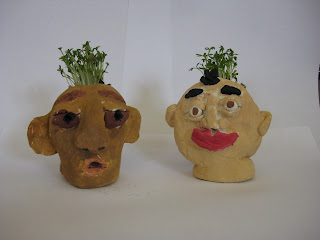 Have just removed clay, or brains as I told them, from clay heads of dads made this week. Some great characters have been created. Plan is to plant cress to appear as hair so I will have the heads around for a long time, Father's day not until 20th June! One dad has a cat on his head instead of hair, his offspring was inspired by a picture of a Toby jug Long John Silver with a parrot. It looks surreal.Photos will follow eventually after drying, firing, planting and painting.
Posted by Susan Dalgleish at 04:09 No comments: